Wineries for sale in Neuquén and Río Negro, wines seeking to rediscover their past

The provinces of Neuquén and Río Negro have historically enjoyed great consideration with regards to wine production. After a latency period, different projects have recovered the strength of this historic region.

1 Wineries and Vineyards for sale in Neuquén 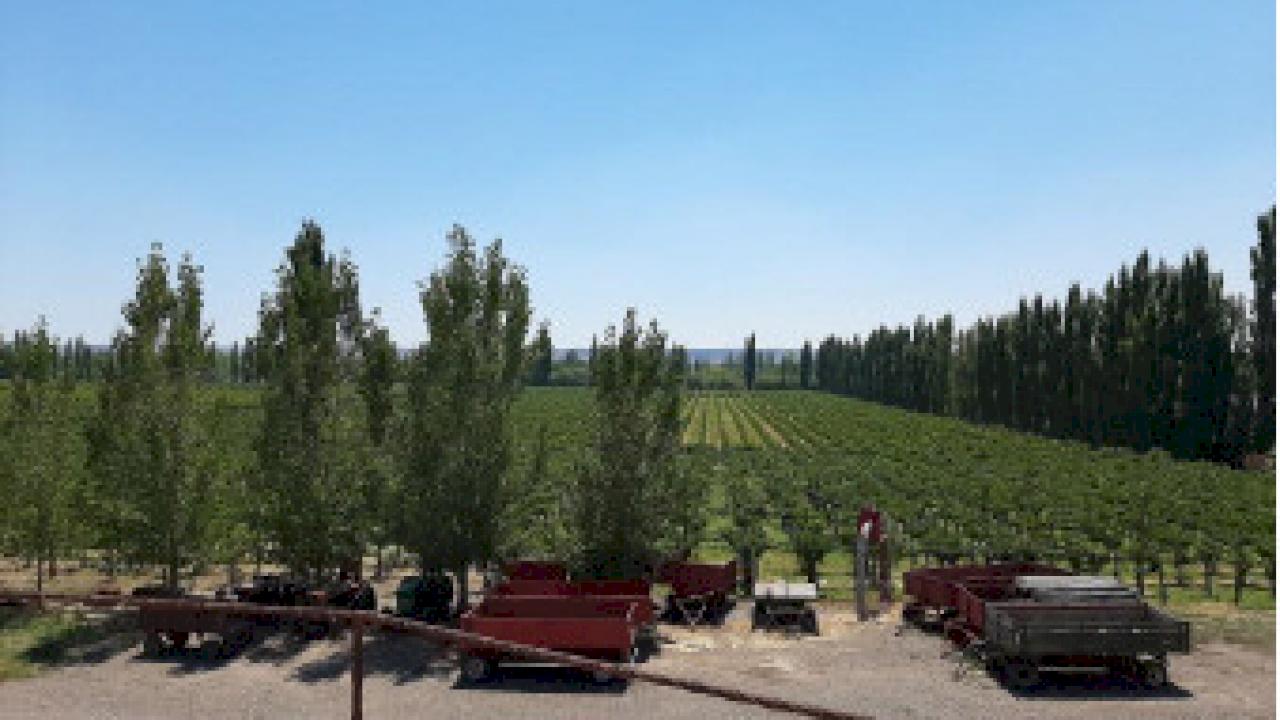 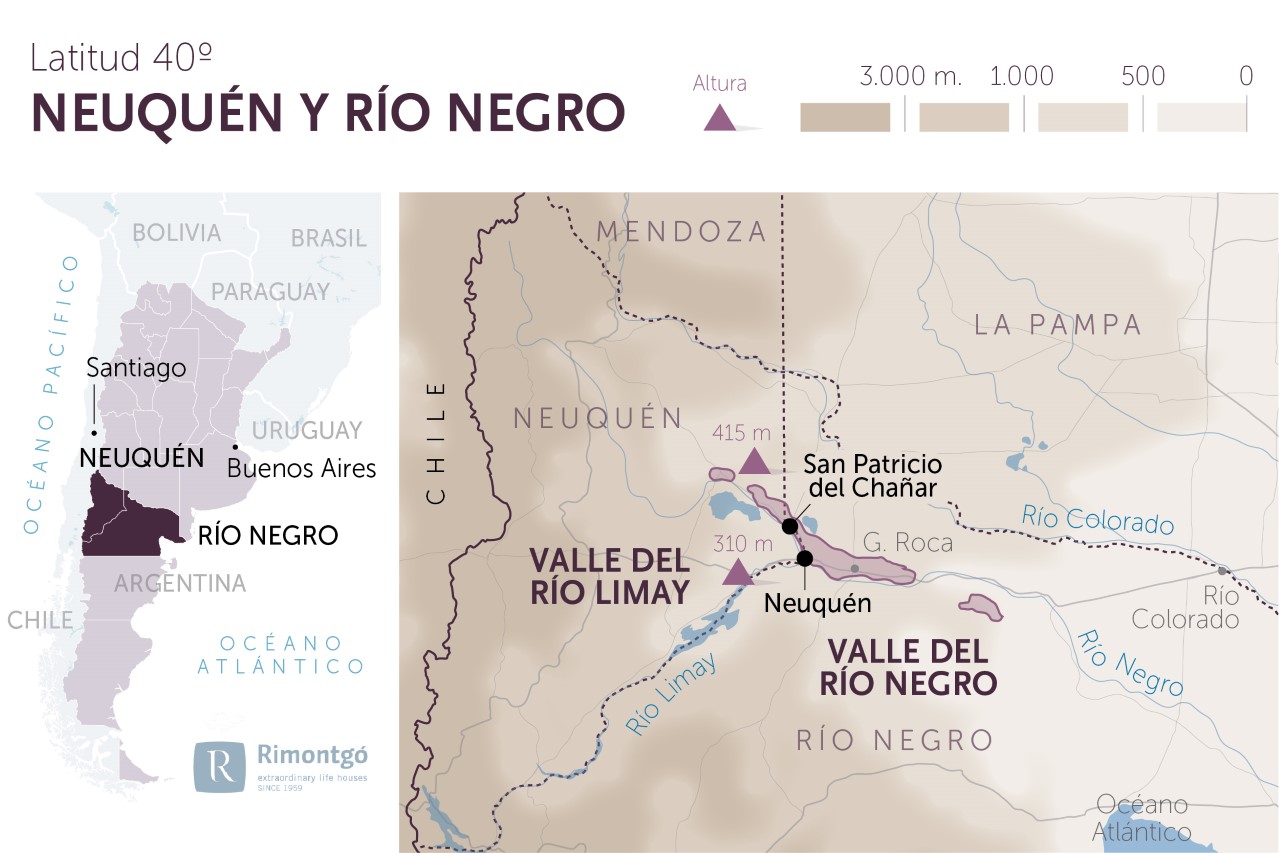 The vineyards of Neuquén and Río Negro, belonging to the Patagonia region of Argentina, are considered the southernmost not only in Argentina but internationally. This is the southernmost of all the regions in Argentina and the one situated at a lower altitude where viticulture is established on the banks of the Negro and Colorado Rivers.

These territories were first discovered by the expedition commanded by Fernando de Magallanes in the early 16th century. The most important cities are Viedma and San Carlos de Bariloche (Río Negro) and Neuquén and San Martín de los Andes (Neuquén).

In the Province of Río Negro, with a very diverse geography, the climate is dry and cold, with low temperature winters and hot summers. A part of the territory belonging to the province of Río Negro frequently suffers the presence of tornadoes and electric storms as it is located within the so-called “Pasillo de los Tornados”, a large and flat area located to the East of the Andes where these meteorological phenomena frequently take place. The economy of both provinces is based on agriculture and livestock, although industrial and mining activities are also important.

On the other hand, in the province of Neuquén, the weather is similar, with a climate of continental nature, with cold winters and summers with punctual peaks of extreme heat. The economy in this province is based on the exploitation of hydrocarbons, such as oil and gas. The construction of different hydroelectric power stations is responsible for the fact that the province of Neuquén produces more than 50% of the electric energy consumed in the country.

The contact of the provinces of Neuquén and Río Negro with the world of wine is due to the arrival, at the beginning of the 19th century, of Hilarión fourque, known as the oenologist coming from San Juan. Fourque imported criolla grape varieties to these two provinces, although he also brought other unknown varieties at the time to this area such as Malbec or Cabernet Sauvignon. Apart from these varieties, some of the most used ones in the wineries of both Patagonian provinces are the red varieties such as Merlot and Pinot Noir. Both Neuquén and Río Negro have enjoyed in the past of great predicament within the wine sector in Argentina. Despite the fact that its activity declined as from the 80s, it is important to remember that until that moment and for a period of approximately 50 years, Río Negro was one of the Argentine areas with the highest production, a go-between after Mendoza and San Juan.

In the Uco Valley and in Patagonia, where the cold climate is a limit for the long cycle varieties (which are harvested later, such as Cabernet or Malbec), wineries such as Salentein, Zorzal, Familia Schroeder, Chacra and Del Fin del Mundo bet on the variety Pinot Noir, with a short cycle and complex cultivation, with great success and expanding the range of varieties for which Argentine wines are known.

In the revival of the wineries in Neuquén and Río Negro it is necessary to mention the importance of San Patricio del Chañar, located in the province of Neuquén, where at the end of the 90s, the wine industry began to flourish again.

A good example of this is that in five years 1,400ha of vineyards have been planted and five new wineries have been built during this time. The population of San Patricio de Chañar, as it happens in almost the whole country, owes a good part of its recent history to the emigration, in this case, of Italians who settled down in this town in the province of Neuquén.

It was during the period from 1920 to 1960 when there were 260 small, medium and large wineries in the region, with the exception of the Humberto Canale winery founded in 1909.

With regards to the wineries located in the province of Neuquén, some of the most remarkable are: bodegas Añelo, bodegas NQN, bodegas Secreto Patagónico, bodegas Universo Austral, bodega Grittini, bodega Schroeder and bodega Valle Perdido.

Bodega Fin del Mundo is very popular in San Patricio del Chañar, the area is characterised by very low rainfall and frequent winds. The height above sea level is only 360 m but due to the fact that it is at 39º south latitude, the vineyards enjoy a thermal amplitude of more than 20º, which favours the slow and harmonious ripening of the grapes.

On the other hand, in the province of Río Negro, we find wine companies such as Chacras del sol, Río Elorza, Estepas, Basanta, Familia Basanta, Bodegas Agrestis, Infinitus, Bodega Noemía and Bodegas Chacra, all of them located in the Alto Valle. Traveling through the east of the province, Bodegas Océano is in Viedma and Bodegas Rivus in the town of Darwin.

Among the best-known destinations in the province of Río Negro are the cities of Viedma (capital of the province), San Carlos de Bariloche and the town of Las Grutas, a very famous destination thanks to its bathing resorts. Other popular tourist destinations are Nahuel Huapi National Park (where the lake of the same name is located), Tronador (highest mountain in Patagonia) or Cerro Catedral, one of the most successful ski resorts in Argentina.

The diversity of the landscape in the province of Neuquén is impressive and therefore it boasts several Natural Parks such as Los Arrayanes or Lanín and several areas protected by the Government of the country. In addition to these natural reserves, the tourist interest in the province of Neuquén is centred on towns like Villa Angostura or San Martín de los Andes, which gather together a good part of the visitors, although it is also necessary to emphasize the winter tourism, focused on the practice of skiing, or that which frequents the limited areas where there are important paleontological deposits.

DO Neuquén and Río Negro