1 Wineries and Vineyards for sale in Cachapoal

Winery with vineyard for sale in the Cachapoal province, Chile.

Winery for local production with a small vineyard located in the Chilean province of Cachapoal. 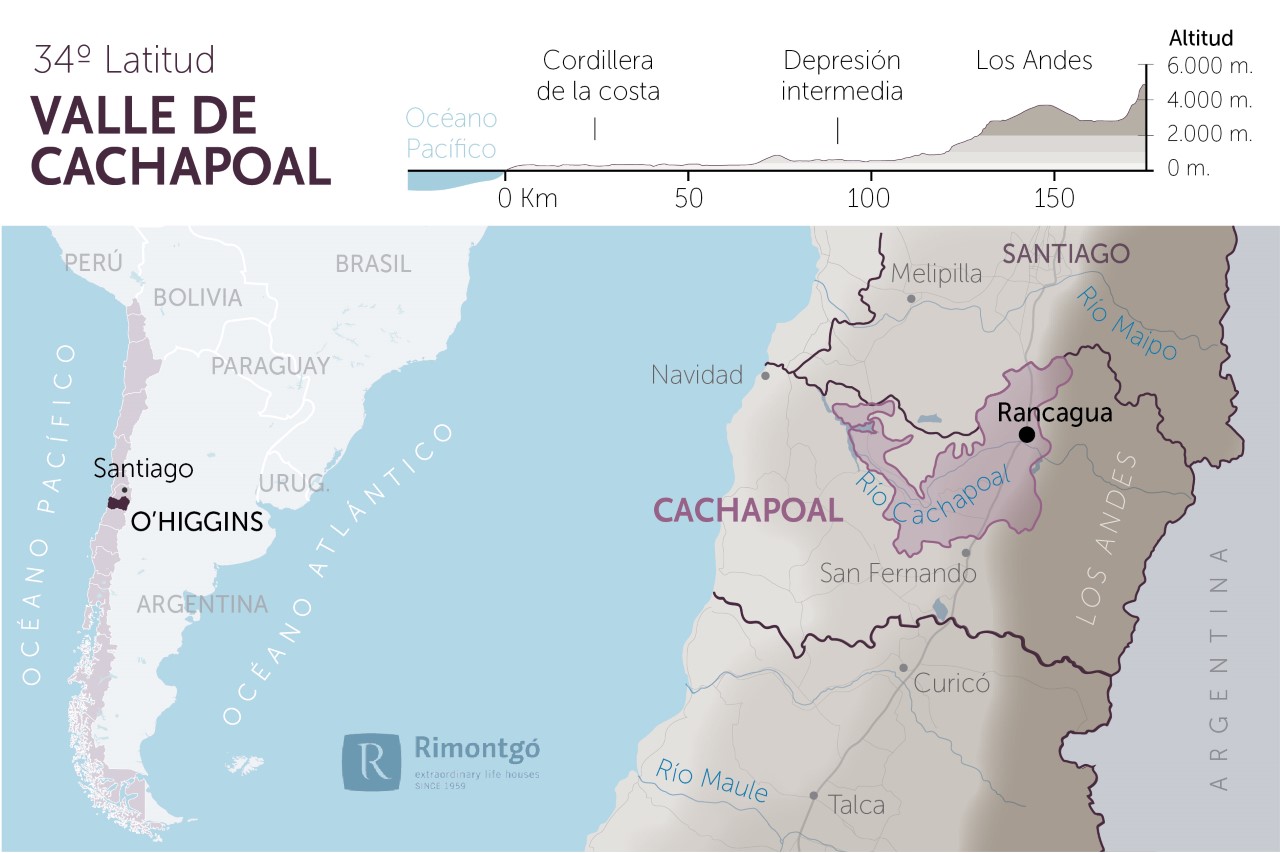 The province of Cachapoal belongs to the O’Higgins region and has a population close to 650,000 people that gather together mainly in cities such as Rengo, Graneros, San Vicente o Rancagua, the latter being the capital of the region. This province was named after the Cachapoal river that crosses the entire province from east to west. This river flows into the Rapel lake that marks the limit with the neighbouring province of Cardenal Caro. The province is delimited by two important geographic features such as the Andes and the Coastal Range.

During the course of the colonial centuries, the cultivation of vine shaped a country identified with the landscape of Central Chile. In 1595, the Spanish Crown issued a royal decree for which the export of wines from Chile to Nueva España and Nueva Granada are forbidden as a protective measure for the trade of Spanish wines. This protective measure continued for centuries and, even though, in the middle of the 18th century Chile becomes the first wine producer of the Hispanic America displacing Peru and Mexico.

It is also notable that in Chile, 200 years before than in California and before any other country of the global south, an important quantity of high-quality wine was produced for the consumers of the time especially in Central Chile.

In 1877 wine exports to Europe began again, thus consolidating a large process of almost half a century. Around 1880, the wine industry was experiencing a boom, given that Chilean wines competed in Europe in the expositions of Bordeaux in 1882, Liverpool in 1885 and Paris in 1889, obtaining good results. The Chilean wines acquired presence and the production showed a notable growth, at the same time that the transport and commercialisation systems became more efficient. In 1883, there were around ten large wineries exporting to Europe.

Contrary to the viticulture in Argentina, the productive and patrimonial revolution of the country originated from the large mining, commercial and bank fortunes in which core appears the image of France as a highly sophisticated cultural model. For that reason, the Chilean viticulture has been built and manged from the 19th century from the top of the social pyramid to its extensive base.

The current designation of origin Valle del Cachapoal was the Chilean area chosen among investors around the world of wine, especially those coming from France. In particular, these investors were attracted by the closest area to the Andes, the so-called Alto Cachapoal or Cachapoal-Andes. These families of investors with previous skills in the winemaking sector were from the regions such as the Loire Valley, Bordeaux and Alsace. Alone or in association with Chilean winemakers, they have been producing wines, especially red wines, of high quality and with features similar to the French wines. Therefore, the red wines produced in this designation of origin, especially those coming from varieties such as Merlot and Carménère, are very concentrated wines with sweet and fruity notes.

As this is a province close to the Santiago Metropolitan Region, many tourists interested in the world of wine do not hesitate to travel to Cachapoal as new touristic programs focused on wine tourism including a visit to the wineries and tasting of wines have been implemented. An example of these offers is the one by Viña Altair with a night wine tour proposal. Other wineries forming part of these Cachapoal Valley wine tours are: Viña Vik, Chateau Los Boldos, Misiones de Rengo or Anakena. In addition to these, there are other notable wine business in the region such as Viña Gracia, Camino Real, Santa Mónica, Torreón de Paredes, Porta Morandé, San Isidro or Las Casas del Toque.

One of the great touristic attractions of the province is the Rapel lake, thanks to its great beauty as a wellness centre and also a place for the practise of several water sports. To the south of Rancagua, a city pertaining to the province of Cachapoal and capital of the O’Higgins region, is found the commune of Doñihue, in which craftwork focused on the elaboration of the so-called “chamando” is still present nowadays. This fabric piece, similar to that of the popular poncho, is worn by the “huasos” or countrymen and horsemen of the O’Higgins region and is fabricated thanks to a combination of sheep’s wool and silk. Curiously, in this country and its surroundings is elaborated the “pipeño” wine, a white wine of a short fermentation, very popular in this Chilean region. Other interesting points are the Cauquenes hot springs, a space for relaxation highly appreciated by the inhabitants of Cachapoal, as well as the mining city of Sewell, also known as “The City of Stairs”.