An ancient wine tradition is the protagonist in Chile's youngest region, an area that bases its economy on the strength of traditional agriculture and has resisted the onslaught of earthquakes in a demonstration of the strong will of its inhabitants to survive. 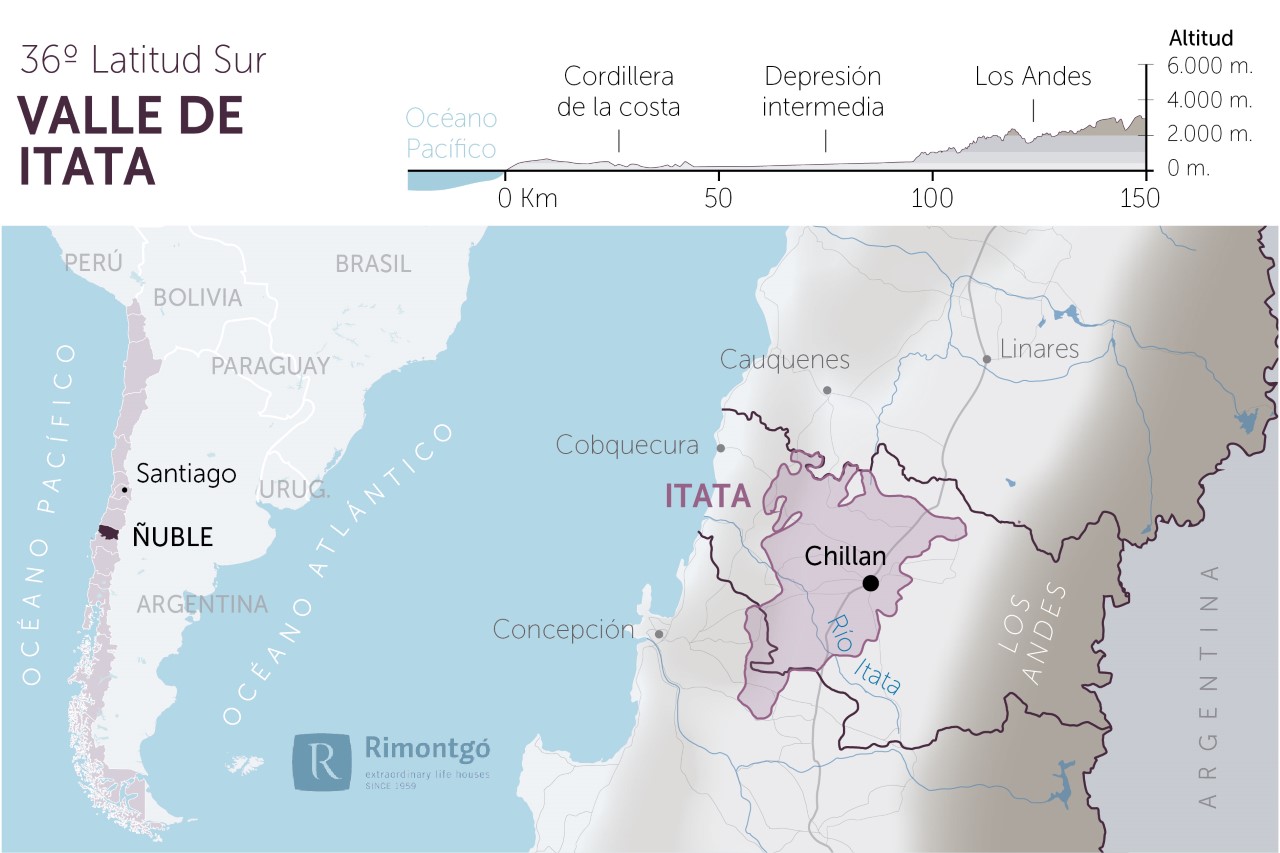 The youth of a region with a winemaking tradition

The region of Ñuble is located in the centre of Chile bordering to the north with the provinces of Linares and Cauquenes (both belonging to the Maule region), to the south with the neighbouring region of Biobío, to the east with the republic of Argentina and to the west with the Pacific Ocean. It is the youngest region of the Chilean country as its appearance took place in 2017 by means of a decree ratified by the government headed by President Michelle Bachelet, which thus granted a regional charter to Ñuble, separating it from the Biobío region, to which it belonged until then.

The Ñuble region is formed by the provinces of Itata, Diaguillín and Punilla. It has a population under a half a million of inhabitants which situates Ñuble at the bottom of the ladder of Chilean regions in terms of number of inhabitants. The rural population accounts for about 30% of the total in the region. The capital of the region is the city of Chillán. As for its geography, Ñuble is not different from other bordering regions since it has four characteristic strips of land, such as the Andes, the Coastal Range, the Coastal plains and the Central Valley.

The conurbation of Chillán, with more than 200,000 inhabitants represents the majority of the region's population. Chillán was founded in 1580 by the governor of the time in Chile, Martín de Gamboa, although in that moment it was born under the religious denomination of San Bartolomé as there was the fort of the same name. Afterwards, the city was rebaptized with the name of San Bartolomé de Gamboa. This metropolis

has gone through several dramatic moments in the past, such as its destruction by the Mapuches in 1655 or the successive earthquakes that seriously affected the city and forced it to be refounded in its present location.

Chillán and its bordering area is the cradle of important Chilean personalities, among which is found the poet Nicanor Parra, the liberator Bernardo O’Higgins or the singer-songwriter Víctor Jara. In Chillán Viejo is found the Parque Monumental Bernardo O’Higgins which houses the birthplace of the Chilean military man and politician, considered one of the "Fathers of the Nation".

The economic activity of the Ñuble region resides in agriculture, among which is found viticulture. There is a long-standing artisan tradition such as textile and woodcarving in different towns of the region. The wood industry has also been protagonist lately of an emerging industry around cellulose production.

Despite its small size, the Ñuble region enjoys reputation among tourists thanks to the closest areas to the Pacific and to several thermal centres that use mineral waters that attract thousands of tourists year after year such as the Termas de Chillán. The proximity to the Andes has made possible the rise of ski resorts and other winter sports. Nature lovers can travel to the Avendaño Lagoon and to the municipality of San Fabián de Alico, two places in Ñuble in which sport, leisure and family tourism can be enjoyed thanks to the possibility of going on excursions or practise recreational sports such as waterskiing, sailing boat or sport fishing.