The calcite present in soils, the key in the defining features of its wines. 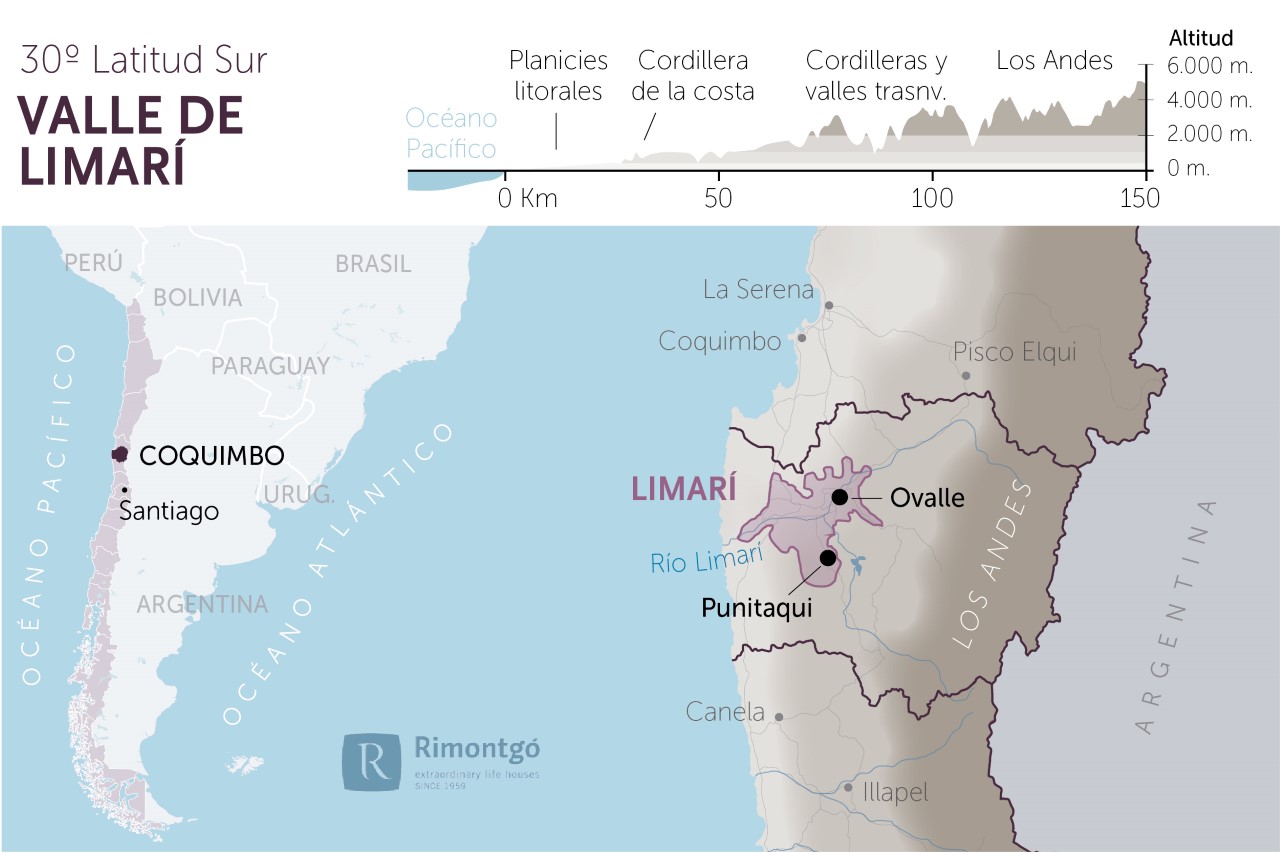 The designation of origin Valle de Limarí extends within the province of Limarí, in the Coquimbo region, occupying the whole land. The area with vineyards reaches 2,500 ha mainly dedicated to the production of grape for the final production of pisco, traditional Chilean beverage.

The remains of archaeological heritage found by researchers in the area comprising the Designation of origin Valle de Limarí indicate the importance of this land in agricultural matters since pre-Hispanic times. In fact, among the vineyards of one of the wineries of this denomination of origin, Viña Tabalí, petroglyphs engraved in the rock by natives to the Molle culture have been preserved, with more than thirteen centuries of antiquity. After the molles, other cultures that occupied these lands were the aconcagua and the diaguita. The Inca empire dominated the area of the Limarí Valley for a period of approximately 100 years, before the Spanish conquest, in which names such as Diego de Almagro, Juan Bohón (founder of La Serena) and Francisco de Aguirre, who also played a leading role in the conquest of the neighbouring Atacama region, stand out.

Within the designation of origin Valle de Limarí two different soil types can be found depending on its location. The southern shore where wineries such as Tabalí or Los Maycas are located, present an alluvial soil type, whereas, in the opposite side wine companies such as Ocho Tierras and Tamaya present alluvial-colluvial soils. It is important to mention that both types of soil share the presence of a key factor in order to understand the acidity, soft aroma and minerality of its wines. It is the so-called calcite.

The Norte Chico has a peculiarity: the Coastal Range is interrupted by the Transverse valleys which are mountain ranges that come off the Andes in an East-West direction and are watered by the rivers, where there is wine making activity.

Continuing with the analysis in western regions of the colluvium and associated with the presence of rivers, the fluvial or alluvial sectors are located. The alluvial soils have been formed due to the dragging, passed by water and through long distances of material coming from the Andes which, during the displacement, polishes the stones to deposit them along the valley in an endless number of rounded shapes. The alluvial zones are characterized by the presence of fluvial terraces formed by the runoff processes of the tributaries. Each fluvial terrace has unique components defined by the shape and force of water movement. Knowing on which fluvial terrace a vineyard is located, is of great importance, since it is the most easily recognizable unit of terroir that imprints hallmark on the wines that come from it.

One of the features of these soils, as it happens with the colluvium, is that a large part of the explorable profile by the root is made up of rock, so it stamps its low fertility character but with higher content of clay and slime, especially in its superficial layer. Said soils preserve the physical characteristics of a high drainage and thin and thick porosity which provides the root enough oxygen in order to breathe and develop through the matrix of rounded shapes. Here a moderate stress on the vine can be achieved without problems, which ensures balanced and complete wines.

Alluvial soils are found as long as the equation mountain deweller-flat-river foothills is found. These soils fall under the designation of cold climates, especially in widely distributed valleys such as Limarí and Choapa.

The designation of origin Valle de Limarí shows a semiarid weather with low rainfall (scarcely 100ml per year) and high luminosity thanks to its clear skies most of the year, as well as mineral soils. Temperatures during the summer months range from 26 and 25 º, a factor that together with the low rainfall results in a longstanding ripening of grapes. In close areas to the Pacific coast the weather is slightly colder, suitable for the cultivation of Chardonnay grapes, while on the hilltops of the designation of origin red grapes are cultivated, for which a longer ripening due to low rainfall that can affect the crops is chosen. The climatic characteristics have influenced in the decision of certain wineries such as Viña Tabalí that decided to plant vineyards in areas close to Valle del Encanto with the purpose of make the most of humidity and iodine thanks to the orientation to the Pacific Ocean.

The Pacific is near and its effluvium strongly iodized can be noticed far away from the inland. In addition, the early-morning mist, the ‘camanchaca’, which is born in the cold of the sea, usually stays late in the mornings.

The climate is a determining factor in the quality of wines; cold with proximity to the coast, mild hot to the center and hotter at 60 or 70 kilometres from the sea, creating appropriate atmospheres for several types of wines. Here the red grapes are very good, because at the highest levels the grapes can be left to ripen until the end, without fear that summer rains could affect them. And further down, the Chardonnay and other white grapes are of great quality thanks to the cold temperature provided by the marine climate.

Lately, vineyards have developed in the Andes at an altitude of 1,000 metres. In higher altitudes and slopes decreases to 0 the possibility to plant vines but in intermediate areas there is an alternative with the Andes mountain climate where summer temperatures are lower. The thermal amplitude is elevated.

The designation of origin Valle de Limarí is considered within Chile as one of the most perfect lands for the cultivation of Chardonnay grapes, although there are other important grapes such as Syrah and Pinot Noir. Several types of grapes such as Carménère, Sauvignon Blanc and Cabernet Sauvignon are also produced in the approximately 2,500 ha of vineyards. A large part of the produced grape is focused to the production of the popular pisco.