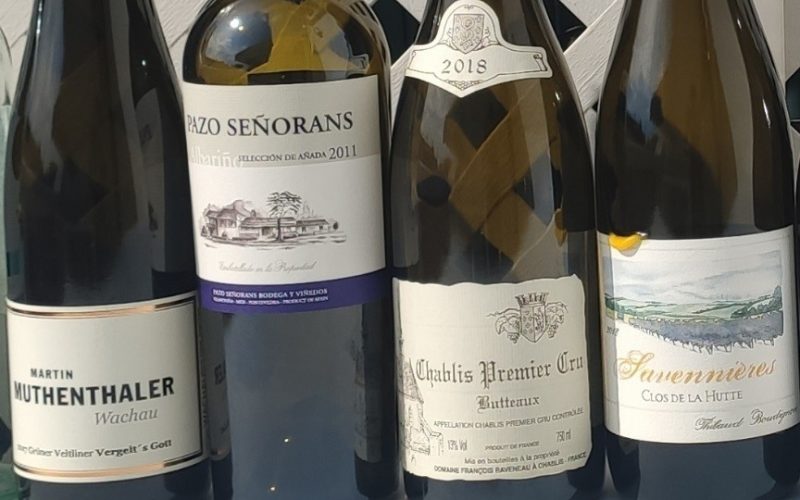 There is a trio of white grape varieties that I find extremely interesting to compare. The proposal should be understood within an educational context, as each of them is typical of a certain wine-growing area and has its own terroir, which, on the other hand, adds an extra point of interest. In my opinion, this is an absolutely brilliant exercise, especially when blind, as it will help us to understand the similarities and differences that different wines can offer, which, a priori, have nothing to do with each other. Those involved are: Albariño, Grüner Veltliner, Chardonnay, especially from Chablis, and Chenin Blanc. We could even add the Galician coupages, formed by albariño, godello and treixedura.

The main point that these varieties have in common is acidity, both because of the intrinsic characteristics of the grapes and because of the cold and humid areas where they come from. From this point on, depending on the way they are made and the interpretation that each vigneron makes of his landscape, the four can offer incredible similarities, to the point that, blind, it can be really difficult to distinguish between them.

I remember that in a blind tasting that I organised with several friends, all of them reputed and impeccable tasters, I selected these four wines:

They all agreed that they had in front of them a grüner veltliner, an albariño, a chardonnay, from Chablis, and a chenin blanc. However, no one was able to put the four varieties and the four bottles in the right relationship. Of course, if I had been one of the blind tasters, I would have joined in, because if I did the experiment it was precisely because I find myself in this situation on a recurring basis.

In addition to the aforementioned acidity, the four varieties tend to coincide in the Atlantic, mineral, citrus, hay, tension, delicate wood and even, on occasions, in slight notes of hydrocarbons, especially in the case of the Albariños and the Grüner Veltliners, which sometimes raises doubts about the Rieslings. All these pieces jump around in our heads with the intention of putting them in place, something that is sometimes complicated, although always didactic and fun. A puzzle game that requires an important mental exercise at an associative level of knowledge.

Perhaps the example I have just given is the one I find most interesting when it comes to studying the similarities and differences between grape varieties, wine-growing areas, winemaking methods and wines. However, there are many other possibilities, both in whites and reds. Exercises that will help us to understand the wines much better, as well as having a really fun time. Try it and then tell me about it.