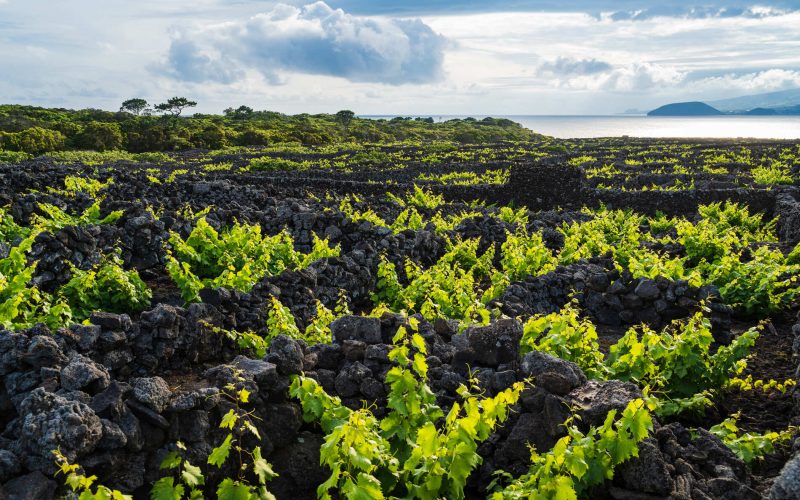 Talking about Portuguese wines can be as wide as doing so about the Spanish ones. Portugal is a country that, although it hasn’t a large extension, it has a great number of wine region throughout its surface, not only in the Peninsula but also in its islands. The country can be divided into four parts: the northern area, from the Douro to Galicia; the central area, between the Douro and the Tagus; the southern area, from the Tagus to the southernmost area; and the islands. Somehow, both rivers and the Atlantic Ocean represent geographic lines which delimit the wine regions of the country.

The north which is the most mountainous area comprises the wine region of Vinho Verde, the Douro Valley, Port and Dao; in the centre, between two large rivers, are located Bairrada, Bucelas, Alenquer and Colares; to the south, flat, warm and arid is found Madeira and the Azores islands. These are the main wine regions, but not the only ones.

It is noteworthy the amount of autochthonous grape varieties that exist in Portugal, almost three hundred. In fact, it is quite common the blend of some varieties in their wine production. For instance, among the white varieties, the Alvarihno, Loureiro, Muscat and Malvasía are a highlight. For the red varieties: Baga, Tinta Roriz, Touriga Nacional and Jaen.

Broadly speaking about the wine peculiarities of Portugal and focusing, more specifically, in the wines, the Port is one of the greatest fortified wines worldwide, whose history is significant and deserves its own post. The whites and reds from Dao and Bairrada developed by good wine makers, offer fantastic results. The sweet Muscats from Setubal are classics well-known by its quality, whilst the fortified wines of Madeira, particularly, seduce me.

Portugal offers an endless range of quality wines: whites, rosés, reds, sweets, fortified…. Unlimited options that over time, we will gradually break it down as we go along.